2012 – the year our retail expertise was recognised by Glasswells

2012 was the year our retail expertise was recognised and put very much into practice by Glasswells, the largest home furnishings retailer in East Anglia.

We were charged with evolving the perception of the brand via a comprehensive marketing campaign, and it’s fair to say it’s been a great first year of work.

As we’ve mentioned before, since we started working with Glasswells we have reached a new demographic and had a positive impact on sales. Now let us tell you how we did it…

Our account and creative teams spent many days on photo shoots coming up with a stylish new look and feel for the brand. The resulting images were used in four different brochures this year and distributed by Royal Mail to almost one million households in the region.

This new brand look was translated into print ads. Over 700 of those have been sent to regional press and glossy magazines since March (that’s around 20 a week!). Adshels, billboards and mega rears across the region were booked, and e-shots including SEO covered off online. And as if we’d forget TV! Last, but certainly not least, the TV ad promoting the winter sale is scheduled to air on 27 December along with supporting radio commercials.

It’s been a busy, but rewarding and successful year. Here’s to another in 2013. 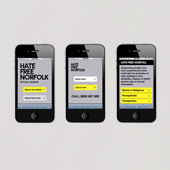 Bringing you our digital highlights...