The future of print media

Ninety percent of all media today is consumed via a screen, according to Google USA. Of the remaining 10 percent of non-screen-based media interaction more time is spent listening to the radio than reading a print newspaper or magazine. So what does that mean for the future of printed media?

The over 55s are the most likely to read newspapers, according to a YouGov study published in February, with 90 percent of over-55s claiming to have read a newspaper in the last year. Clearly print still holds great appeal for this sector.

At the other end of the spectrum young adults are the least likely to read newspapers, with 29 percent claiming not to have read one at all in the past 12 months. But compare that figure to the number of those aged 18 to 24 reading a newspaper online and the figure jumps to 61 percent. Nothing surprising there though – it is a mobile generation after all.

These results indicate that the sector in which you circulate will affect your success in the printed medium. One can assume that magazines, such as Saga, which appeal directly to the over 55s, will also be doing well. Similarly, the subject matter you address will impact on circulation. The fashion industry, for example, can rest easier in the knowledge that glossy tomes such as Vogue are reader bibles to be pored over numerous times and kept for years.

The fact that The Sun, which is pretty broad medium paper, has a daily circulation of 2.2m shows that the sector is far from over. In any other field, a new emergence with the weight, force and speed of the internet would have annihilated the competition. The fact that printed media has held its own shows reassuring strength and resilience.

In such a rapidly and dramatically changing market we believe it is time – and only fair – to consider a new method of judging the success of print media in the face of screen-based media consumption.

For now, the success of print media is defined in terms of the relative rate of decline. As the Press Gazette reported in January, every single daily and Sunday national print newspaper saw year-on-year circulation declines. It described the Daily Mail and the Daily Mirror as among the best performing titles “by keeping their print sales declines to 6 percent and 6.6 percent respectively”.

Going forward, it is unrealistic to expect the sector to have maintained its previous rates of growth and one would hope that a new method of basing its success is created. After all, we don’t continuously judge the success of the economy now on what it was at its peak in the 80s, do we? 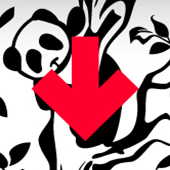 Google’s Panda is packing a fuzzy punch to SEO rankings