Was Penguin 3.0 Worth the Wait?

In its fight against piracy and spam, Google has released the latest update to its spam filter algorithm known as Penguin. The result is that sites Google deem to be spam appear lower in search results. Although it has been a year in the waiting, many websites waiting in the hope over a year of content writing will pay off and improve their ranking in the search results and increase traffic to their sites. From results so far, the update is expected to affect only a small number of sites.

At the centre of a new content marketing campaign by the UK’s VisitBritain tourism agency is a “Discover Great Britain” Tumblr page. The one year campaign aims to promote Britain as a destination across a number of digital platforms. Renewing their partnership with Yahoo, using their content marketing solution will see the new Tumblr page being circulated across Yahoo platforms including its digital travel magazine in the US.

With the announcement on its latest version of Android, Google have decided to go up against Facebook by announcing that it is launching a text-messenger app called Messenger, set to rival both Facebook Messenger and recently acquired WhatsApp. We can’t image Facebook is best pleased with the name choice.

Launched on 17th October 2012, GOV.UK is the UK Government’s official website. Now two years old, the website has seen over a billion visitors and is now the place to go to for all Government online services. Not only is the user-centric site simpler, clearer and faster, it has changed the way that government works internally.

Over the years many have enjoyed the Rolo brand. It has brought us that well known question:

“Do you love anyone enough to give them your last Rolo?”

Part of a wider social media campaign, Nestle have decided to bring it back for a whole new generation. They have released a number of short videos, each featuring someone having to decide whether or not to share their last Rolo with a loved one. Aimed at a number of different target groups, the videos all appear on the brand’s YouTube channel. Will we start to see old adverts making a comeback? 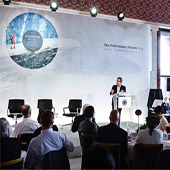 World-Wide Audience for Our Design