Owen, our junior website developer, and his band Project Multivitamin were lucky enough to play at the Olympics on Saturday. That’s a pretty cool claim to fame in our eyes.

The band secured the prestigious gig via somewhereto_, the quite frankly brilliant concept that helps 16-25 year olds across the UK find incredible spaces to do the things they love. For Owen and Project Multivitamin that space was at the Olympic Park as part of the spectator entertainment team, on the bandstand and on the walkways between venues, playing acoustic ska – their take on reggae.

Owen comments: “This was a brilliant opportunity for the band to play in front of thousands of people and a great experience to be a part of the Olympics. The atmosphere was electric. As we finished playing on the bandstand, which is very close to the athletics stadium, Mo Farrah won his second Gold for the 5000m. It was a moment to remember hearing the crowds roar and gave us a chance to imagine what it would be like to have 80,000 people cheering for us!” 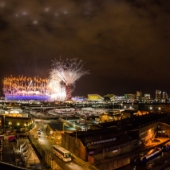